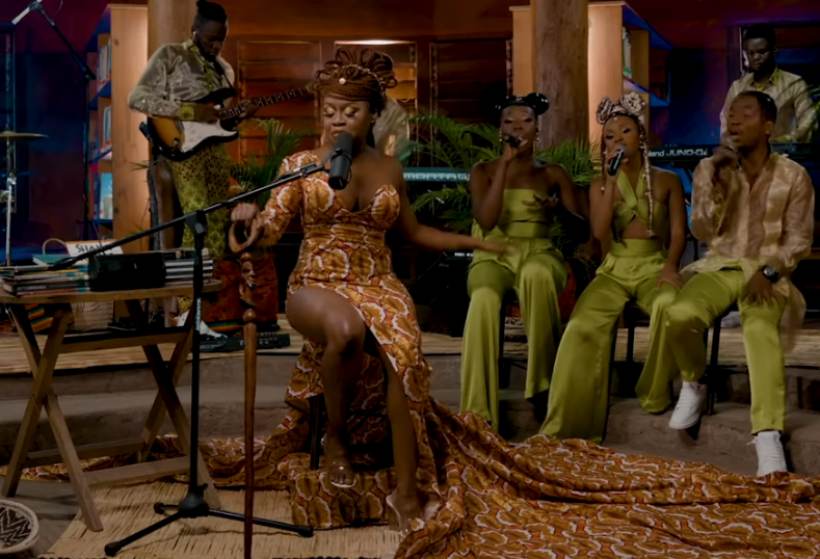 She hits hard, energetic, superior, convinced of her message as she is nor more scared to call a spade, a spade evoking even the cursing word of “these motherfuckers.”

According to NPR Music “, the concert features four weeks of Tiny Desk (home) concerts and playlists by Black artists spanning different genres and generations each week.”

The Zambian, Botswana-Australia-raised, poet appears clad in a chitenge attire bridled with art. Her head is covered in thick strands of wolven hair rising across the middle in a pattern that forms an African headwrap.

Her dress is unusually long stretches flowing from the area of her breast gliding to the floor covering the entirety of her left except for the arm.

However, on the right is her thighs exposed in some voluptuous meat as the longer opening extends fantastic almost to the hind joint.

Nonetheless, Sampa The Great extends exposing the fantastic quality of her work almost poetical, a rhythm and poetry stabbing with points and hard stamping.

She opens the NPR Music Tiny Desk Concert with “Rhymes To The East” wrapped in the flavor of “Energy”. On the vocals she is assisted by Mwanje Tembo, Tio Nason and Joy Tusankine Namwila.

She progresses to “Mwana” before hitting “Freedom” outpouring into the “Final Form.” On the keys is Lazarus “Lalo” Zule and Kasonde “Te1” Sunkuntu on the drums. Mapalo “Mapskeys Mapalo appears on the bass while Samuel Masta handles the guitar.

According to NPR “the lineup to be featured includes both emerging and established artists who will be performing a Tiny Desk concert for the first time. This celebration highlights the beautiful cornucopia of Black music and our special way of presenting it.”