ZAMBIAN music legend Jeff Mulenga never ceased to amuse and whenever he jumped on stage to grab the micro phone, his die-hard followers just went wild.

Jeff’s voice was both touching and inspiring, his stage gimmicks were sensational and dramatic, a feat that always sent fans into a frenzy.

He was exciting on and off the stage and no one could mistake his smooth voice each time he was being greeted by his admirers.

“Yeah, my name is Jeff, am the one,” as his face exploded into a charming smile.

Jeff always stuck to certain personal standards, appearing smart all the time and became a household name when he released his hit song, Journey to Kasama, which brought him into the lime light.

Omitting Jeff’s name from the Zambian music archives can only punch holes into the history of Zamrock and would never be complete without the mention of him.

Born Jeff Kayula in 1945 in Luanshya, this versatile musician had his sight set on music as early as the age of Eight.

By the age of 15, Jeff had already found himself in the middle of a singing family comprising his mother Mandalena Kafula, uncles and aunties who all sung very well at Church and other social gatherings.

In fact, Jeff’s maternal uncles were guitarists and one of them, Peter Kafula, a cobbler at New Mikomfwa Market in Luanshya, played Jazz and Blues with Tropical Swing Stars during the late 1950s and early 60s. 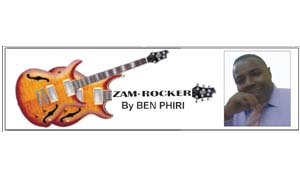 Around 1960, Jeff as a young and upcoming musician, sung freedom songs for the Zambia African National Congress (ZANC) and the United National Independence Party (UNIP) during political campaigns on the Copperbelt.

Jeff later migrated to Kitwe’s Wusakile mine township where his uncle Michael Kafula Mulenga, a founder and promoter of the once sensational band, the Fireballs, was a miner.

Because Jeff was close to his uncle whom he took as his real parent, he adopted Mulenga as his surname, dropping Kayula and this is how he became popularly known as Jeff Mulenga.

His uncle Michael, together with Jeff’s close colleagues such as the late Chris Chilangwa and former Tinkles front man, Kennyball Simpungwe, who played with him in a mine sponsored band called Rhokana Melodies during the 60s, had a hand in grooming him.

“Apart from an encounter with him in the early 1960s in Luanshya, I also sung with him in the Rhokana Melodies together with Chris Chilangwa,” Simpungwe said in a recent interview.

While in Kitwe, Jeff performed in various night spots such as the Italian Club then housed in the current University of Zambia (UNZA) regional offices which was patronised by the white community.

Jeff, who was good at reading musical notes, forced himself to study and sing in languages like Portuguese, French, Italian and Spanish just in order to get closer to the mixed race audience.

After Jeff’s uncle founded the Fireballs in 1968, he was ushered into the outfit to become its leader and was on lead vocals, his young brother Frank Kayula Mulenga on Lead guitar, Dosai Musakanya popularly known as Dozy Mu, on Keyboard, with the late Scott Kunda who later played for the Front Page, on rhythm.

Others were Jack Mwengwe on bass and Jones Kunda was on drums.

The band jammed at Lido Cinema which later became Astra and the band also performed at the other Lido Cinema hall in Wusakile.

But in 1970, Jeff left the Fireballs to go back to his home town in Luanshya where, together with his young brother Frank and Dozy Mu, founded an outfit called, Jeff and the 15,000 years Ahead, which was sponsored by Zimbabwean born business executive Neville Hwalima.

This divided the fans who failed to choose between the Tinkles then reigning supreme and Jeff’s band and this brought stiff competition and rivalry, forcing the 15,000 years Ahead to relocate to Lusaka in 1973.

The band went without Dozy Mu, who opted to remain and rejoined the Fireballs in Kitwe.

In the same year, the 15,000 Years Ahead, clinched a deal with the Zambia Air force (ZAF) which assumed ownership and as a result, the band changed its name to Jeff and the Explosives, taking Zambian music to a different level.

Explosives had Jeff on rhythm and lead vocals, his brother Frank on lead, Chris Tembo (drums) and Jack Mubanga on bass.

The band toured all the eight provincial centres of the country marketing itself well, etching its name as among Zambia’s best outfits.

In 1976, The Explosives released its maiden album, Journey to Kasama, under the Flying Bird label, which became an instant hit and took the country by storm. The album was produced by Goodson Ng’uni.

The album had songs like, I have Got To Move, Journey To Kasama, Since You Have Been Gone, Push It Higher, and Play With Fire, while the other side had Mwenda Na Ba Chilekwa (Twalishiba Fyonse), Baka Fwimbi Tulikuya (Mwilekuchula), Stick Where You Are and I wanna Love You.

Towards the end of 1979, Jeff and the Explosives differed with the ZAF command and were forced to leave after failing to reach a compromise and in came, the Air Power band who replaced them.

Jeff and the Explosives were no more and with all band members scattered, Jeff went solo appearing among stars like Keith Mlevhu, Rikki Ililonga Teddy Khuluzwa or better known as Dr Footswitch and Ricky Banda of the Chifundo Pa Mutima fame.

Air Power Band leader and drummer Allan Sinkala who is the young brother of former Great Witch drummer Boyd Sinkala, described Jeff as among the best musicians to have ever emerged on the Zambian music scene.

“Although I did not perform with Jeff, he used to come over from time to time to play one or two songs but I must say that, he was a realist and perfectionist,” Allan said.

Around 1980, Jeff backed by Scott Kunda released a single, Tulile Intungulushi (Sha Chalo Chesu) flipsided by Jouney from Kasama, the opposite number of Journey to Kasama and thereafter, things became tough for him and almost became destitute.

Many times he patronised the former Nkana Hotel in Kitwe, where he conducted solo performances for his fans who also took care of him.

The year 2003, saw the demise of the legend, who left a trail of foot prints that could be traced to the time when he was a menace to the local music fraternity.

Jeff, a former Luanshya Secondary School student and quit school after he refused to be canned by his teacher, passed on in Lusaka, survived by five children.

His smooth voice though sadly missed in reality, still echoes in the ears of his dear fans.