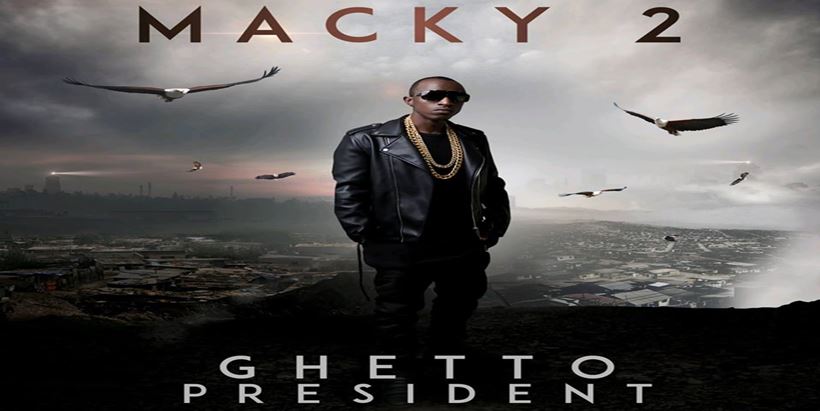 Ghetto President is Macky 2 Musical Album released on 27th June 2018. The album features songs like Bring It Back where Macky 2 featured his younger brother popularly known as Chef 187

Ghetto President is a 19 track album focusing on the literal and everyday conditions lived up by most Zambians. Though the album is influenced harder by the Copperbelt youths circumspect. References to Black Mountain and the tragedy of hustling are already made apparent just in the Intro.

Of course inspirational Spaxmining does not fail to get a line of reference from Ghetto President.

Macky 2 presses hard and convinces to the fore his musical rap talent. This gives the Ghetto President a firm album requirement and personal inputs.

The album features Daev in My Story track where Macky 2 flows heavily. And Daev contribution is no more no less than that sweet voice. Daev emphasise the importance of achievement held by good values than most of the just the front portrait hiding the torn reality.

Isa Kuno (come here) is a 5th track that features the Jemax likes, and ups you on some max. Double the track number and off course Macky 2 does remember Exile and persuade him to “Everything is Better” exploring the new breed of Zambian young women referred to as Slay Queens. The track is total and shows the slay queen exploitative nature.

Ghetto President closes on a kind of prayer asking a hand from Emphrain and Njamba. The duo dare for that deep emotional gospel passion immediately after the album title track Ghetto Presidente. Umitima Wandi is passionate and thankful and shows Macky 2 ever religious attribution.

But in between a rare offering cant go unnoticed with “Ami Wabo” featuring the man of the great works our own folk and kalindula leader Mumba Yachi. Here Mumba consults the emotional absorption that surround divorce especially when one side crawls in error.

But before the Ami Wabo Camsta so calm backed up by Badman Shapi celebrates the achievement from hard work. “Get Out” at 11th position restore that hard press noticeable at the intro and Camsta shakes things up necessary calm and deliberate.

The Ghetto President offers an album for the year where so many musician struggle just to have a full studio album. But here Macky 2 lengthen to show he has still in him stored material we will enjoy for a time to come.

Other notable songs include Paka Kumanda feat Drifa. Mwenze Kuti featuring Dope G and Jorzi brings out the style that we have learnt of Dope G. Pay Back is track number 4 which looks for Wilz & Nemo who fall no short than for a musical showdown.